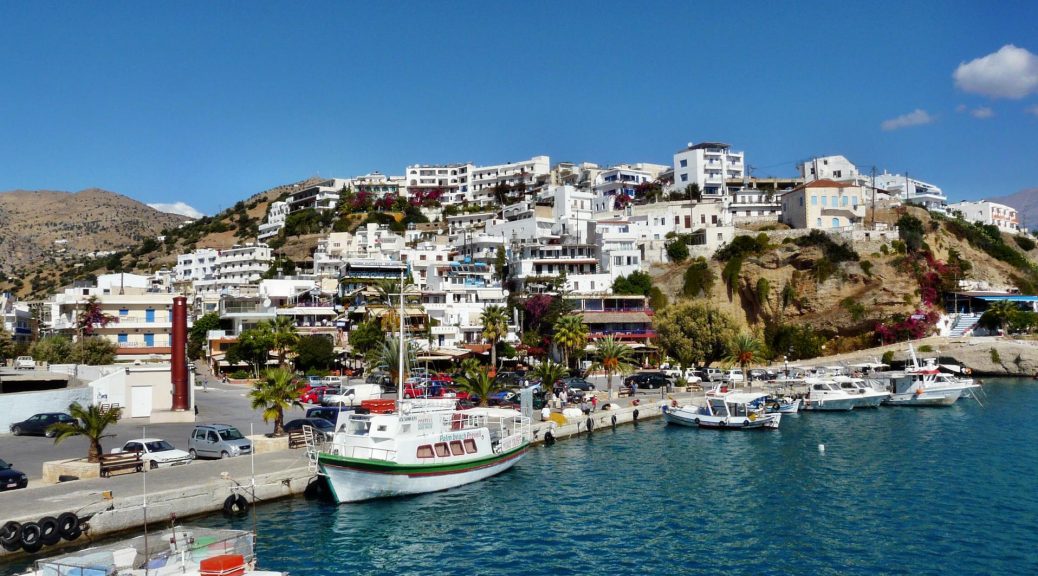 Agia Galini is a traditional fishing village on the south coast of Crete.

It is located 61 km southeast of Rethymnon and 68 km southwest of Iraklion, at the southernmost point of the Libyan Sea with a view of the Messara Bay.

Agia Galini maintains its picturesqueness as the visitor is able to combine mountain and sea. Here, there is a wonderful beach with sand, small pebbles and deep blue waters.

Agia Galini port, right in front of the village, accommodates cruise and sailing boats which gather there in the summer months.

The amphitheatric arrangement of the houses makes Agia Galini a special place, offering a wonderful view of the port and Messara Bay, whilst equally impressive for the visitor is the view from the port to the village.

Agia Galini is a very hospitable village. Strolling its narrow streets, one can see the old houses of the village and discover its history, 40 years before, when today’s touristic center was a small fishing village with about five hundred inhabitants.

The area is full of taverns and restaurants. Away from the main road with the tourist shops, in the small alleys, you will find more traditional taverns with home-made food, where some locals enjoy a snack and a small glass of raki. On the rock, above the small port there are many restaurants which provide an exceptional view of Messara Bay.

If you are a lover of traditional entertainment, in some of the taverns of the area there is live Cretan music.

Today’s Agia Galini settlement is built on the ancient Minoan city of SOULIA, one of the one hundred cities of Crete described by Homer. It was a center of worship with a temple dedicated to goddess Artemis. In the 7th century SOULIA was destroyed be pirates.

Remnants of this city and the temple, such as buildings, tombs, marbles and two granite pillars, which still ornament the church of the village, have been discovered in Agia Galini.

Agia Galini’s bay constituted a suitable anchorage for boats and was used in the 1821 and 1866 revolutions for unloading ammunition. Later, as it was the nearest port to the fertile and oil-producing area of Ampadia and Melambes, it was used for loading olive oil on to ships. At that time there were no inhabitants.

The settlement was established in 1884, when buildings, olive oil storehouses and some residences were built for trading purposes.

Through the years, the trade and export of olive oil increased substantially and thus customs were established there. After some years, (1890) 20 people were living permanently in the settlement.

According to tradition, Agia Galini took its name from the Byzantine empress Eudokia (or from Athinais, daughter of the Athenian philosopher Leontios) who on her exile journey to Africa by ship, faced a great thunderstorm whilst being close to the ancient city of SOULIA

Begging the assistance of Virgin Mary, she advised the crew to approach the land and made a vow that if the sea went calm she would build a church dedicated to Virgin Mary Agia Galini.

And indeed, the boat anchored safely to the leeward beach of the village, where the sea was always calm, and the empress started building the temple which she named Our Lady Agia Galini and after years became Agia Galini. In this byzantine temple of Virgin Mary, which is architecturally significant, today’s village cemetery is located.

In Agia Galini is also the cave of Daedalus, where according to myth, Daedalus hid himself whilst being pursued by king Minos and together with his son Icarus, managed to fly to freedom using his self-built wings glued with wax

The rock that Daedalus and Icarus used as a base for their flight is located on the right side of the port facing the sea, still seeing them off on their doomed journey.

At this spot there are two statues, these of Daedalus and Icarus as they get prepared for their journey, which are easily accessible to the visitor.