Since 2004, the newly-inaugurated Archaeological Promenade, a 2.5-mile long, pedestrian-only, tree-lined walkway skirting the foot of the Acropolis and linking all the city’s major archaeological sites, has made the city centre infinitely more walkable and reduced the notorious traffic congestion and exhaust fumes. 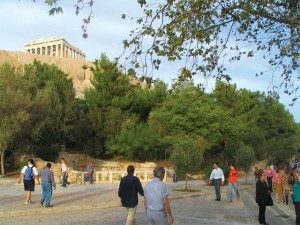 But visitors don’t come here just for the ancient monuments. Despite the current economic crises, contemporary Athens boasts one of the most happening nightlife scenes in Europe, which now centres on the urban-chic bars and cafés between Syntagma and Monastiraki (at the foot of the Acropolis), and the up-and-coming neighbourhood of Metaxourgiou, known for its art galleries and hip eateries. And somewhat surprisingly, more and more new bars and restaurants keep opening, even in times of strife. 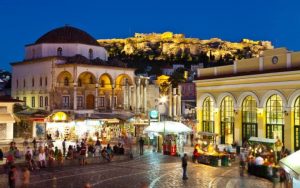 Athens is served by Piraeus, the largest passenger port in Europe and the major node for the countless ferries, catamarans and hydrofoils that serve the Greek islands. The port has 11 modern berths for cruise ships; during the 2004 Olympics, the world’s largest cruise ship, the Queen Mary II, docked here and served as a floating hotel. Since then, the number of cruise ships passing through Piraeus has increased exponentially. In 2012, it was the world’s fourth most visited cruise port, receiving 2,067,000 passengers.

Athens was built around the Acropolis, today the city’s most visited ancient attraction. On the Acropolis’ northeast slopes, pretty Plaka is Athens’ oldest residential quarter, extending down to Monastiraki. From Monastiraki, Adrianou street leads west to Thissio and Kerameikos, while the pedestrian-only shopping street of Ermou runs east to Syntagma, home to the Greek Parliament. North of Monastiraki, Athinas street delineates the Psirri district and passes the Central Market to arrive at Omonia. South of the centre, ferries to the blissful Greek Islands depart from Piraeus port.