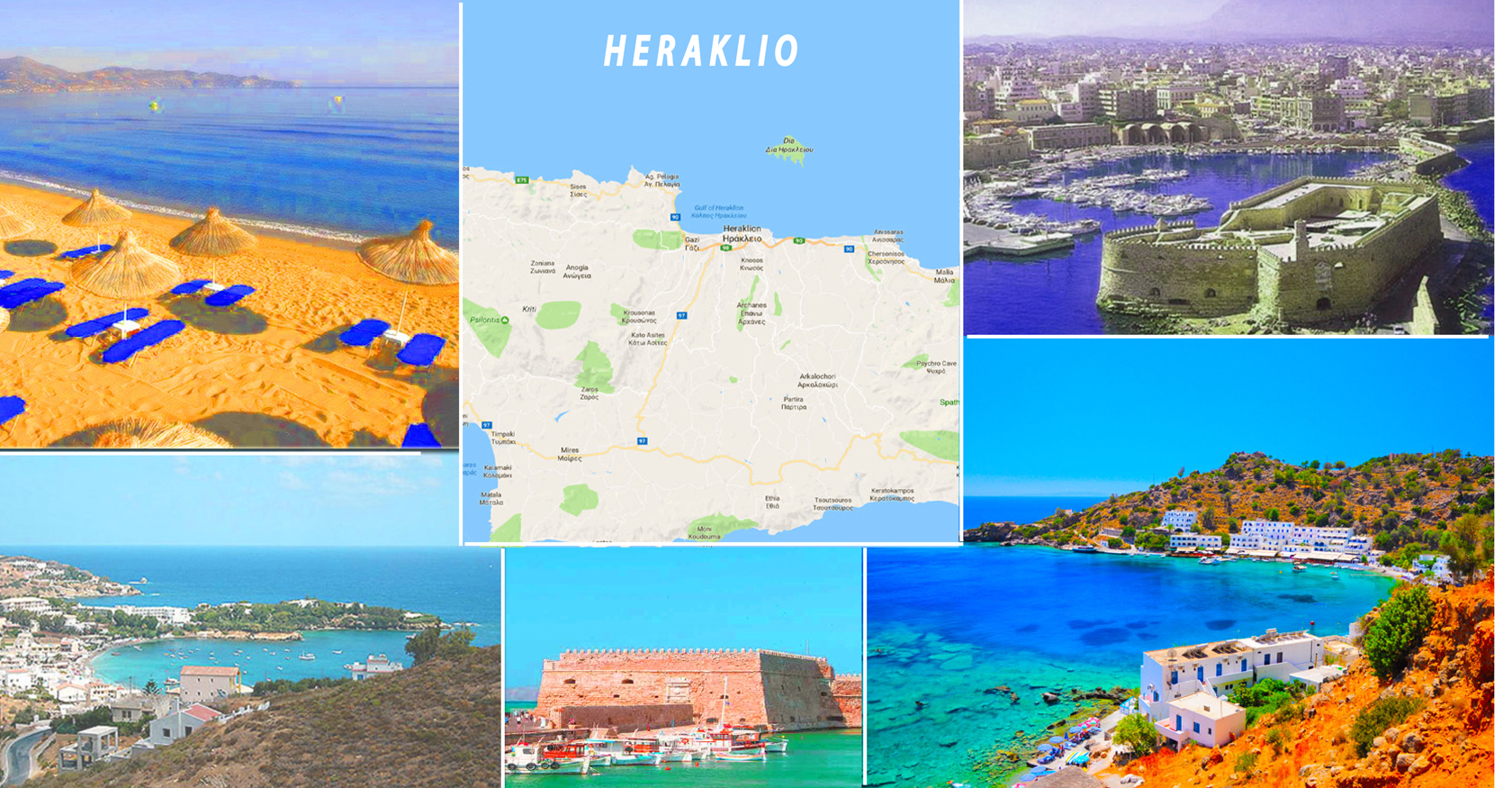 The prefecture of Heraklion is the largest of Crete is the largest population with 131.000 inhabitants and is the richest region having the highest per capita income. The prefecture of Heraklion is located between two mountain ranges, the Ida to the west and the east Dikti. The valleys behind Heraklion produce some of the finest grapes used as either edible, either for the production of raisins. In these valleys, the British archaeologist Sir Arthur Evans excavated the Minoan Palace of Knossos, the ruins of a great civilization. The fertile plain of Messara is cultivated for thousands of years. There are important Minoan, Greek and Roman archaeological sites, the largest of which is Phaistos, Agia Triada and Gortyna. In the south there is another low mountain range, the “Kofinas”, which separates the valley from the coast. The impressive peak of Psiloritis, 2,456 meters above sea level, is visible from almost all points of Heraklion.
Heraklion is the 4th largest city in Greece, and has the largest port in Crete, and  the largest airport. Heraklion Airport is also known as Nikos Kazantzakis International Airport, having named the most famous writer of Crete internationally.
In Heraklion there are two large hospitals (University Hospital and Venizelio Hospital). Also here are the Faculties of Sciences and Health Sciences of the University of Crete (with 8,000 students) here based Research and Technology Institute (ITE-FORTH) one of the largest research centers in the country, and the Technological Educational Institute of Crete (with 6,500 students). Overall, there are eight university colleges and 11 technical colleges (TEI).

Heraklion history
In 3,000 years of its existence, Heraklion boasts a checkered history. When first inhabited the low hill, which today is the center of Heraklion, it is not known with chronological accuracy. Besides, in antiquity the main urban center was Knossos.
As for the name Heraklion, it probably comes from the Ideon Hercules, the mythical father of the Olympic Games.
The history of Heraklion can be divided into the following periods:
• Minoan Heraklion, the first settlement is created with the name Heraklion (9th century BC)
• Byzantine Heraklion or Kastro
• Arab Iraklio or Candia
• Grand Castle, 2nd Byzantine period
• Venetian Iraklion or Candia
• Turkish Heraklion
• Heraklion in early 1900
• Heraklion on the 2nd World War
Heraklion Attractions

Knossos
The Minoan Palace of Knossos is five kilometers south-east of Heraklion, in the valley of the river Kairatos. The river springs from Archanes, runs through Knossos and flows into Katsambas, the Minoan harbor of Knossos. As for the trees in the Knossos, these were planted by Evans. The over 9000 years continuous habitation has brought great changes in the natural environment, which do not allow us to easily imagine the actual Minoan landscape. The first settlement at Knossos dated around 7000 BC, in the Neolithic Age. The economic, social and political development of the settlement led by the late second millennium BC the construction of the magnificent palace of Knossos. Knossos was the seat of the legendary King Minos and the main center of power in Crete.
First this castle of destroyed in 1700 BC about, but rebuilt to permanently destroyed now by fire in 1350 BC. Since then the site of the palace converted into a sacred grove of Rhea, but not re-inhabited. The palace of Knossos is the monumental symbol of Minoan civilization in terms of construction, use of luxury materials, architectural plan, advanced building techniques and impressive size.

Phaistos, or more correctly the Minoan Palace of Phaistos, is located in south-central Crete, the Messara plain, 55 km south of Heraklion and a short distance from the archaeological site of Agia Triada, the archaeological site of Gortys and Matala . Phaistos is among the  most important archaeological sites in Crete, and is visited by many thousands of visitors every year. The Minoan palace of Phaistos corresponds to a flourishing city, not accidentally, it arose in the fertile plain of Messara in prehistoric times, ie from 6000 BC approximately to the 1st BC century, as attested by archaeological finds. The excavations in the wider area of ​​Phaistos began 1900 by the Italian Archaeological School under the leadership of Federico Halbherr and Luigi Pernier while after the war undertaken by Doro Levi. Most buildings visible today belong to the New Palace period ie 1700 – 1450 BC so, it is worth noting that unlike Knossos has been no efforts at restoration but only conservation.

East of the current Malia is the Minoan palace of Malia. It is the third largest palace of Minoan Crete and it is built in a privileged location, near the sea, on the road linking eastern and central Crete. The Palace of Malia in mythology served as the residence of Sarpedon, brother of Minos, and  was constructed in 1900 BC. The pre-existing significant settlement from which are preserved parts around the palace, thereby becoming a palatial center-city. The first palace was destroyed around 1700 BC and rebuilt around 1650 BC, in the same location and with the same basic design of the old. Finally, in 1450 BC destroyed and not inhabited again. Only in the Mycenaean reign built among the ruins of a small building that was probably a sanctuary. Malia have the chance to walk to the real palace, as revealed in the excavations of archaeologists. Most of the ruins visible today belong to the New Palace complex, the second palace, the rooms of which are organized around three courtyards, the central, northern and the “courtyard of the tower.” It is a palace which attracts the interest of visitors to the majestic size, complex plan and multiple details.

Agia Pelagia
Considered one of separate resorts on the island and is a hub for anyone wishing to visit the sights of the island.The  village of Agia Pelagia is a seaside resort and the houses are built around the coast in an amphitheater style. West is surrounded by the Lygaria Bay and east of the Gulf of

Cretaquarium
To Cretaquarium – Thalassocosmos officially started its operation in December 2005, in the city of Gournes in Crete, 15 km. East of Heraklion. In a location that is a unique research park, education, culture and recreation, which aims to promote and diffuse the knowledge of the marine environment. To Cretaquarium was established by former employees of the Institute of Marine Biology of Crete, ie creation of the Greek Centre for Marine Research Explore the world of the Mediterranean Sea from near and admire the hundreds of species that live their life beneath the waves.

Hersonissos
Hersonissos is 26 kilometers east of Heraklion on the highway. The seaside resort of Hersonissos is a lively town all year round, unlike the rest of Crete where some hotels and restaurants are open only during the tourist season. The tourist agencies make reservations at most of the hotels, which makes it very difficult or impossible to find a room. An important trade center in ancient times. The peninsula was the port of Littos city (near Kastelli Pediados). Later the city was autonomous and its inhabitants they issued their own currency, which depicted the head of Artemis on one side and Apollo with a lyre on the other. Archaeologists believe that the peninsula was the place where was a temple dedicated to Vritomartis, the “sweet virgin” later identified with the goddess Artemis. The remains of the temple and some other buildings were found in the Greek Meadow area. Just outside the eastern part of the port of Hersonissos are the remains of some marine works of the Hellenistic Age.

other places worths visiting are: