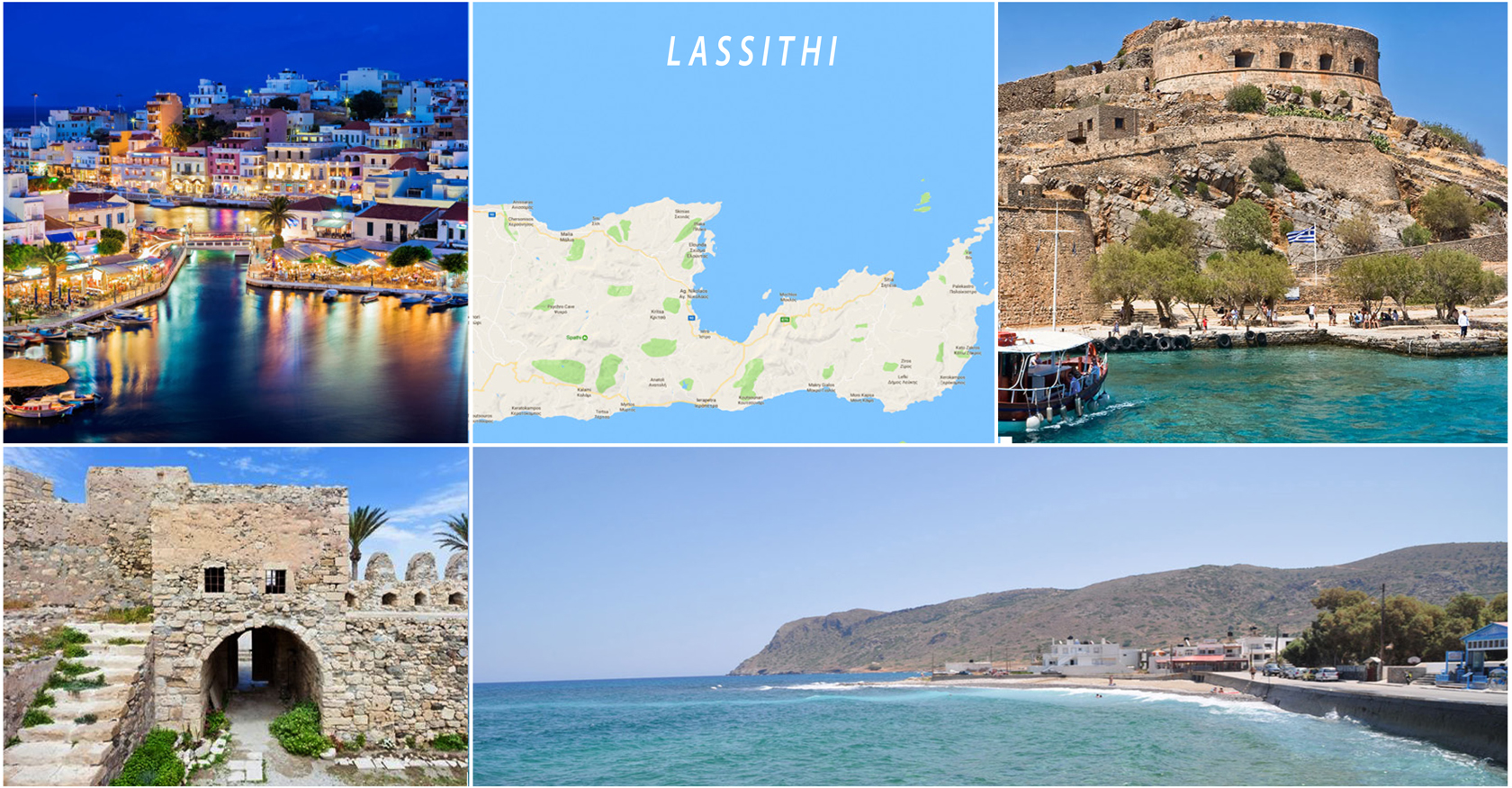 Three sides of Lassithi are surrounded by sea: the Mediterranean sea from the north, the east and the Carpathian Sea in the south. The prefecture has four provinces Mirabello, Lassithi, Ierapetra and Sitia. The major cities are Agios Nikolaos, Ierapetra and Sitia .

The Agios Nikolaos, or just Agios as the locals call it is the capital of the prefecture. its name derives from the Byzantine church located in the bay of Agios Nikolaos. Oldest known city names were Mandraki and Gialos. Agios Nikolaos is a very cosmopolitan city with intense tourist activity.

Ierapetra is the southernmost city of Greece and Europe. The city has many hotels, inns and taverns. Around the harbor there are many restaurants. Boat trips are organized for Gaidouronisi.

Sitia due to its geographical position is remote from the rest of Crete. It has developed a different character from the rest of the island. The tourist development is limited but still a large number of tourists visit it every year, mostly Greeks. Visitors to the county during the summer months  will enjoy swimming in the clear and distinct beaches. Some of them are Agia Fotia, Elounda, Milatos,Sissi, Myrtos, Vai, the Dome, Makrygialos, Koutsounari and many others.

The Holy Fire just 4 km from Sitia is a small coastal paradise with crystalline waters. Elounda, 11 km from Agios Nikolaos is a cosmopolitan area with luxury hotels, The beach, next to the harbor is small and pleasant. From here leave the boats that make trips to the island of Spinalonga. If you seek relaxation, beaches, hot sun, pleasant people, culinary delights Lasithi awaits you to explore it !!!

Agios Nikolaos
Agios Nikolaos, the capital of Lassithi, is a picturesque and popular resort . The harbor area is full of activity while restaurants and cafes create a cosmopolitan atmosphere. The city still has retained its traditional style. The  Lake is the most beautiful ornament of the city. The legends bear Athena and Artemis bathed in its waters. Joined to the sea by a narrow channel, while its natural surroundings of red rock and trees attract many visitors. In the small theater of Lake locals and visitors alike can enjoy interesting artistic events.
You can easily reach Agios Nikolaos in about an hour from Heraklion, approximately 1.5 hours from Sitia and approximately 45 minutes from Ierapetra

Elounda is a developing resort 11 km north of Saint Nicholas with  coastline, shaded beaches, crystal clear water, serene and beautiful environment that gives you the chance to admire the spectacular bay of Mirabello and Korfos. The area is known for its bays and rocky shores as well as for the beautiful village of Elounda, the fishing port and the sunken city of Olous which owes its name, as well as the remains of a Byzantine basilica. It is the favored place of legendary figures from Minoan Crete and of historical figures of our time. Elounda currently has 2,200 inhabitants living in 6 settlements, most of them in Skisma principally engaged in tourism and fishing.

Spinalonga
Spinalonga is a small island which closes the northern Bay of Elounda, Mirabello Province.
The ancient name was Kalydon, but after the occupation by the Venetians named in Latin “spina lunga”, meaning “long thorn”. From this name and paraphrase the island got its current name. Well fortified by the Venetian. 1905 was used as Leper refuge  for all the lepers of Crete, which were first isolated in “Meskinia” outside Heraklion and caused an infection outbreak, and for other people.

Vai
Perhaps the most famous beach of  Crete.  Vai Beach is 25 km east of Sitia, on the east coast of Crete and is the only place in Europe with wild palm trees. The palm forest that surrounds it is the largest in Europe. Vai “discovered” by hippies who were persecuted in the early 70s from Matala and found in the area, looking for new shelter. By early 1980 Vai had become permanent camping place and had turned into a vast garbage are .In 1980s Vai was declared a protected area and purified. Today it is considered one of the most beautiful areas in Crete and the beach carrying the Blue Flag of the European Union.

Sitia
Sitia is on the north coast of the Bay of Sitia. There is a regular bus service from Agios Nikolaos. The harbor is the best on the east side of the island and can accommodate small fishing boats and larger cargo and passenger ships. East of the port of Sitia there is a sandy beach.
Sitia was the birthplace of the famous Cretan poet Vitsentzou Cornaro. The epic poem “Erotokritos” still sung and recited. It is the love story of Erotokritos by Arethusa princess, the daughter of the local lord.

Ierapetra
Ierapetra is the largest city in southern Crete. Located at the narrowest point of the island and is easily accessible from Agios Nikolaos. Ierapetra enjoys the mildest climate in Europe with low rainfall and temperature rarely drops below 12 degrees Celsius throughout the year. Ierapetra has many hotels, inns and taverns. Around the harbor there are many restaurants. Boat trips are organized for Gaidouronisi. Ierapetra nowadays is among the most productive areas of Greece and one of the major sources of fresh vegetable, flower and oil in Europe. Because of the mild climate and the fertile soil of the majority of the population is mainly engaged in the production of early vegetables and olive oil. Large amounts of  vegetables exported throughout Europe, contributing to the economic development of the region. Another important part of the region’s income comes from fishing. Fresh fish comes daily in Ierapetra by fishermen throwing their nets in the southern coast of Crete.

Toplou Monastery
Historical monastery of the 15th century, which collapsed in the earthquake in 1612 and rebuilt with the financial aid of the Venetians. Destroyed and depopulated by the Turks after the conquest of Crete. The monastery is stauropegion fortress. The main building of 800 square meters, has three floors and includes cells, lodges, kitchens, the abbot warehouses. The church is a two-aisled, with the northern aisle dedicated to the Virgin and the south aisle later to St. John the Theologian. Characteristic bell tower of the monastery bears relief crowns and crosses with inscriptions dated 1558. In the Monastery, there is also an interesting Museum.

About 4 km east of Sitia a small coastal village with a clean beach and crystal clear waters, the coastal road from Sitia to Vai. Here you will find simple hotels, a few umbrellas and sunbeds and a couple of good restaurants for a quiet and pleasant stay