Μykonos with Delos, Rhenia and some rocky islands are a cluster of islands. The island is flat island, with an area of ​​75 sq. km. and an altitude of 364 meters. Predominant rock is granite, while noticeable is the absence of trees with presence of bushy vegetation to only some parts of the island (Panormos, Kalafatis, Ftelia). Rineia (13 sq. Km., 149m.) Is flat and used for grazing livestock, certain points covered by brushwood and there abandoned fields. Tragonisi (1.1 sq. Km., 149m) is rocky and rough, with sharp points. There are mines and flat areas. Finally, Stapodia (0.5 km2, 133 m) is rocky with sharp points, limited scrublands, brushwood and few flat surfaces.

Mykonos climate is temperate, rather dry and mild, generally winters. A special feature of the climate are the strong northerly winds (the famous “winds”) that blow in summer, during the day. Snow is rare, rains nonexistent summer and rather few in winter. The sun, in the summer months is brilliant and very hot and therefore dangerous, which must take account of a visitor of the island.
The “lunar landscape” of the island hides a lot more life than we may conclude one judging from the first sight: the naked hills hold multiple small “treasures” away from the eyes of the average visitor. Rocks and stone walls, a large lizard with thorny appearance is the “trademark” of the island, more than anyone pelican. From this “Mykonos lizard”, widespread in the land of Ionia, it took its name of the crocodile of the Nile. When the Ionians arrived in Egypt, compared the form of true crocodiles (which until then were called “champsai”) to that of the lizards in their homeland.

One of the most known local cheese  is  “Kopanisti”, a kind of soft spicy cheese, and “sour” in limited quantities. Mykonos sausages, sausages, “louzes”, “children”, etc. Are always sought after by Greek and foreign tourists .
It should finally be made particular reference to the formerly famous and award-winning “marzipan” Mykonos kind of traditional sweets oriental type with exquisite aroma and flavor, and “orgeat” (a kind of traditional non-alcoholic refreshing beverage) based also on almonds.

Mykonian louza is a very typical and tasty snack racing in preference, for those who know of Greek delicacies, the – famous too – sausages Mykonos. It is a traditional sausage made from local pork and includes whole fillet from the back of the animal with the little fat that surrounds it. This dries out and “fired” in the north of the principles and winter sun, carefully prepared with some salt, pepper and other herbs (savory). After louza matured is  maintained for as long as we are in the freezer, to avoid losing the dew dries. Served as a tidbit, cut into thin slices that get dark ruby ​​and leave in the mouth all the flavor and rich aroma. The small louza made from another dorsal muscle of the pig, the “tenderloin” is still very young and said “Boubouli”.
The Kopanisti of Mykonos is a typical, very spicy cheese. Accompanies wonderfully ouzo and any possible Greek aperitif, onto bread or – under way- in Mykonos soaked barley rusk, with tomato or cucumber. The Kopanisti is the result of a sustained and repeated fermentation is done under the care of a traditional cheesemaker in local base mixed cheese (goat), which once mature, easily maintained in a clay or glass jar. The preparation is known to the other Cycladic islands, but differs significantly from kopanisti other islands and is regarded as the most powerful and aromatic. 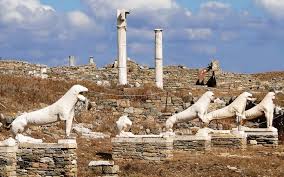 The sacred island of the ancient Greeks who, according to mythology, was revealed through the Aegean waves from Neptune to, persecuted by Hera, Leto, which there and gave birth to Apollo and Artemis. Delos preserved in good condition the ruins of one of the largest and most impressive organized settlements of Greco-Roman antiquity. The island was inhabited in the third millennium BC, possibly by Carians. Converted early 10th century BC to worship and seat Great Amphictyony Aegean. At the end of the 6th century BC the Athenians dominated the sacred island. In 540 BC, Peisistratus decides the first clearance of the island, while the second, in 426 BC, carried the bones of all the dead Delos to the neighboring island of Rinia and longer prohibited births and deaths on the island of Apollo so as not defiling the Sanctuary.
With the advent of the Macedon in 315 BC, the island achieved its independence and developed commercially. H installation of the Romans later, results in the massive turnout of Egyptians, Syrians and Italians and the further development of the island to 88 BC where during the Mithridatic wars, accepts two terrible attacks and begins to decline until the final abandonment of 6th AD century. After centuries of immobility, the French Archaeological School started excavations at the archaeological site in 1873 and Delos surfaces again from obscurity, revealing its rich history all around the world. The Archaeological Museum of Delos is today one of the most important in Greece. Delos and Rhenia are under the protection of the Ministry of Culture and mooring boats prohibited and night people without special permission.
Drafaki, Vrysi, Glastros, Platy – Gialos

Interesting small monuments scattered rural – until recently – and areas to the south of the country: in Drafaki (Paspari), one can see some very old but well preserved churches. In Fountain, discovered a few years ago an unusual for the Cyclades vaulted tomb of the Mycenaean period, with rich and interesting content that reveals the special relations of the island with the Helladic Mycenaean centers. In the same area, there are wonderful dovecotes in old gardens. In Mykonian countryside there are the remains of some ancient square or round towers, which should belong to a defensive system of the island: The tower at Lino, 10 meters in diameter. The tower in Portes dominates Platis – Gialos, with much smaller diameter (3.5 m.) Also there are ancient wells still in use, such as the well “of Giannarou”, an underground tank built with granite stones and ladder for descent to water. Another well, the “Pouados”, with steps to the side to provide easy access, is maintained under the ring road Tourlos – Korfos.
Little Venice 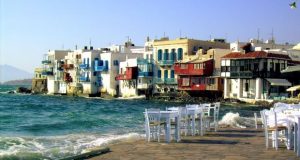 Between Castle and Scarpa is the picturesque neighborhood with colorful balconies and wooden “Budo” hanging – as if – over the sea. One can enjoy here one of the most beautiful sunsets in Greece.

Paraportiani is a unique remarkable architectural complex, the creation of which contributed not only man, but also the time that the accidental damage caused, established a final result of unparalleled beauty. The “Paraportiani” got its name from the fact that it is next to the small NW gate, “the paraporti” of the medieval wall of Mykonos. In facti, there are  five (5) churches, where four of them are on the ground floor and one elevated.. Created initially in the period between the 16th and 17th century architecture of its uniqueness, have highlighted important monument not only for Mykonos, but also for the entire Aegean.

Mykonos beaches are famous all over the world for their golden sand and the crystal waters. As this is among the most popular tourist destinations in Greece, most Mykonos beaches are organized with many tourist facilities, from seaside accommodation to beach bars, restaurants and water sports centers. The best organized beaches in Mykonos are found on the southern coast, which get extremely overcrowded during peak season. Paradise Beach and Super Paradise Beach are famous as the best party beaches in Greece. Beaches on the northern coast of the island are less organized and ideal to enjoy some calm moments. Nudism is frequently practised there. You will find below a list with the best beaches in Mykonos island